West Ham will reportedly hold out for offers in excess of £100million for star midfielder Declan Rice.

The 22-year-old has been in demand for some time as Premier League giants, Manchester City, Manchester United, Chelsea and Liverpool are all credited with admiration.

Irons’ boss David Moyes has previously stated that Rice is worth ‘far more’ than £100million to his side – a view seemingly backed up by the east London hierarchy.

That’s according to a report from Football London, as cited by A Football Chat Show on Twitter, claiming that West Ham will hold out for their top value.

#WHUFC have reportedly set a £100 million price tag on their star man, Declan Rice. Do we think he will stay, Hamm… https://t.co/Rn7pcSHc0C (@FootyChatShow)

The report also claims that neither Manchester club would be deterred by the asking price for the 26-cap ace, whilst Chelsea may have to sell in order to make the deal a possibility.

Last season Rice played an integral part in Moyes’ side, scoring twice and providing one assist in 32 Premier League outings.

Holding a market value of £63million and under contract until 2024 (Transfermarkt), West Ham truly hold all the cards when it comes to setting their price.

In truth, only Rice forcing the club’s hand would make a sale feasible, something that could happen were the London-born ace seek UEFA Champions League football.

Should that happen, the Irons are right to demand the maximum value in order to replace and suitably replenish the squad.

Should West Ham Cash In On Declan Rice? 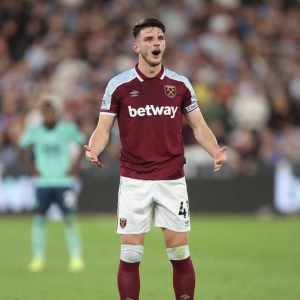 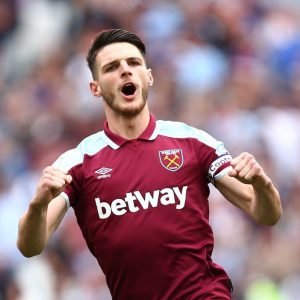