This comes as reports continue to link the 22-year-old with a move away from the Hammers as Chelsea, Manchester City and Manchester United circle.

Rice has been in sensational form for David Moyes’ side once again this season and helped inspire the Irons’ into a top-four spot over the weekend.

Speaking on his brother’s YouTube channel Ferdinand Presents Five, former West Ham ace Anton was full of praise for the England ace but had a word of caution.

Declan Rice, for me his attitudes and attributes are fantastic. For the hype that he is getting and all the talks around him potentially moving his level has gone up. They haven’t stayed the same. His levels have gone through the roof and that’s a testament to him as a person. What I will say is that maybe moving ain’t always the best thing. The best thing is to stay put.

So far this season Rice has earned a 7.31 average Sofascore rating from nine Premier League outings.

The 27-cap England man has scored twice and provided two assists from 12 appearances across all competitions – more goal contributions than the entire 2020/21 campaign.

West Ham are certainly reaping the rewards from Rice’s improvement.

Seemingly free to join in attacks more than ever before, the Englishman is becoming the complete midfielder.

Valued at £63million (Transfermarkt), David Moyes already believes that the Hammers have a £100million plus player on their books and will be desperate for the prized asset to follow Ferdinand’s advice.

Will Declan Rice Remain At West Ham Throughout His Career? 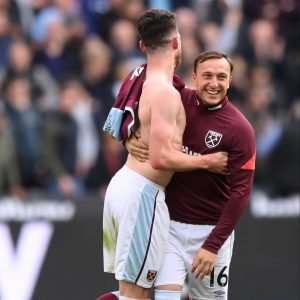 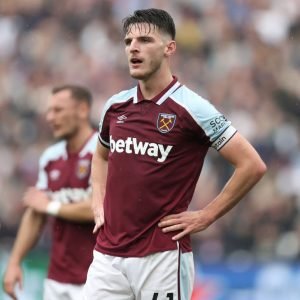