The 22-year-old midfielder is regularly linked with a switch to a seasoned Champions League participant and speculation over which club alters seemingly by the month.

Currently, it’s Premier League champions Manchester City who are the favourites to land Rice, making the ace their ‘top priority’ to replace Fernandinho.

I think the development will be at some point, and West Ham fans won’t like me saying this, that he’ll somehow have to obviously transfer to a club that’s going to the Champions League, where he plays in midfield with high expectations, where he’s playing against teams that are dropping deep every week. I think he meets the demands on players to be good on the ball, to drive with the ball. I think he’s a good defender as well. He’s got a massive physique and he’s got good speed.

So far this season Rice has scored twice and registered two assists in 10 appearances across all competitions – earning a 7.26 average Sofascore rating in the process.

This conversation must now be water off a duck’s back to Irons’ fans.

In many ways a compliment to the star’s ability, Neville in particular is bound to advocate for a move as his own club, Manchester United, would love to have Rice marshalling their midfield.

From a West Ham perspective, clearly on the right trajectory under David Moyes, the club can only continue to improve, buy top quality players and strive to meet their prized asset’s ambitions. 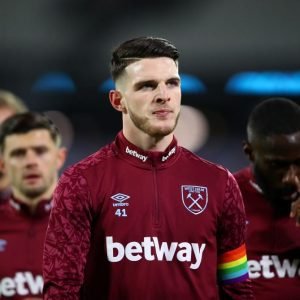 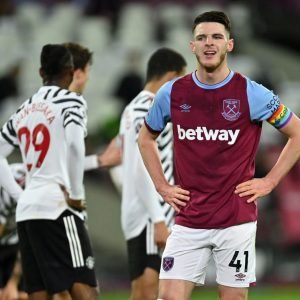