West Ham midfielder Declan Rice is seemingly never far from speculation linking him with a move away from the London Stadium.

The 22-year-old has been heavily linked with Chelsea in the past and now a report from The Athletic has claimed Manchester City have made the ace their ‘top priority’ to replace Fernandinho.

Speaking on BBC Sport, former Tottenham striker Garth Crooks has claimed that it’s ‘only a matter of time’ before Rice leaves the Hammers.

West Ham fans won’t like me for saying this but how long can the East London club hold onto him? This lad should be playing Champions League football. It’s only a matter of time.

Crooks also stated that the 27-cap England star ‘gets better with every game’ having replaced Mark Noble as on-field West Ham captain.

This season Rice has scored two goals and provided two assists in 10 appearances across all competitions.

Whilst a move has seemed inevitable for some time, recent progress under David Moyes renews the belief that the midfielder could be an Iron for the long haul.

Participation in the Europa League this term is proof that the current crop are on the right path, perhaps going deep in the competition could keep Rice on board.

Should it come to pass that a sale is the only option as City circle, West Ham must extract every possible penny from their £63million valued prize asset.

Will Declan Rice Be At West Ham Next Season? 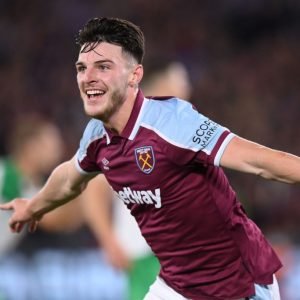 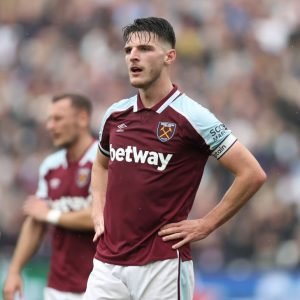