West Ham are believed to have enquired over the possibility of signing Italy winger Domenico Berardi this summer.

The Sassuolo ace was part of the Italian team that beat England on penalties to lift the Euro 2020 title recently and is wanted by a host of Europe’s elite clubs.

Irons’ boss David Moyes is hoping to further improve the attacking ranks at the London Stadium and the 26-year-old is the latest name seemingly on the Scot’s radar.

That’s according to a report from journalist Alfredo Pedulla, as cited by West Ham Central on Twitter claiming that the east London club have asked about Berardi.

The report mentions interest from Lazio, AC Milan, Borussia Dortmund and Chelsea, whilst previously Liverpool and Tottenham have been mentioned as admirers of the 17-cap Italy star.

Berardi provided one assist for the Azzuri on the way to Wembley glory following a superb 2020/21 campaign domestically.

Coming in from the right onto a natural left foot, the wideman scored 17 goals and added another eight assists in 31 Serie games last season – earning an impressive average Sofascore rating of 7.43 in the process.

Valued at £31.5million and under contract until 2024 (Transfermarkt), signing Berardi would prove to be an expensive outlay.

Predominantly operating from the right, the Italian ace would ace as fierce competition to Jarrod Bowen.

Without doubt a top-quality performer and albeit wholly necessary to improve the attacking options at Moyes’ disposal, given the price, position and age, this may not be the ideal solution. 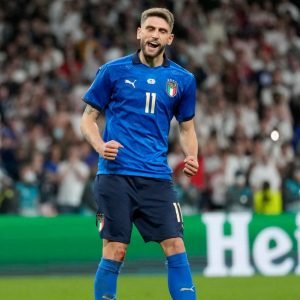