The combative star is currently sidelined with a knee issue picked up away on international duty but has enjoyed an excellent campaign, inspiring the Hammers to fight for European qualification.

Spotted in London, a group of well-meaning Manchester United fans shouted ‘Declan, come to United’!” before posting the moment on Twitter.

A Man Utd fan to Declan Rice – his reaction

A friend of the group clearly believes the 22-year-old’s future lies with Mount at Stamford Bridge and jovially pleaded with the Irons ace to instead join Chelsea.

Rice will be desperate to get back to full fitness and continue to lead David Moyes’ side admirably, with the hope of finishing inside the top four and subsequently secure Champions League football for next term.

Qualifying for Europe will almost certainly secure the future of Rice in east London for the foreseeable future at least.

Whilst many will hope Rice remains a Hammer for the duration of his career, realistically the only feasible way that happens is if the club continues to compete in the upper echelons of competitions and continue to meet the star’s ambitions.

Nevertheless, laughing at the prospect of a switch to Manchester or west London is a good start.

Will Declan Rice Be At West Ham Next Season? 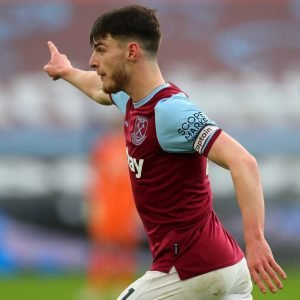 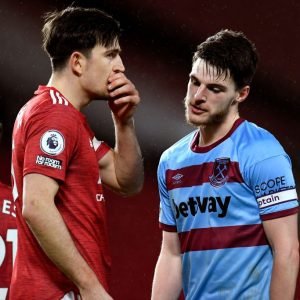