West Ham are believed to be ‘closely’ watching the development of Croatian wonderkid Roko Simic.

Son of legendary defender Dario, the 18-year-old striker would appear to be a chip off the old block when it comes to ability.

Already a prolific goalscorer at the Under 21 international level under former Liverpool ace Igor Biscan, Simic is attracting attention from across Europe.

According to a report from Jeunes Footeux, as cited on Twitter, the Hammers, Tottenham, RB Leipzig, Real Madrid and AS Monaco are all keen on the centre-forward.

The report suggests scouts have been ‘comparing him to Erling Haaland’ following a string of stellar displays whilst out on loan.

Plying his trade away from parent club Red Bull Salzburg for FC Liefering, Simic has scored eight goals in 11 appearances across all competitions this season.

Already valued at £1.80million and under contract in Austria until 2025, signing the Croatian teenager would already represent a lofty expenditure.

Seemingly enjoying a whirlwind early senior career, Simic has all the potential to be a star of the future given the elite levels of interest.

Meanwhile, it would appear to be part of the modus operandi for David Moyes to give youthful centre-forwards a chance as a report from The Athletic claims the club are hoping to tie down 16-year old Divin Mubama. 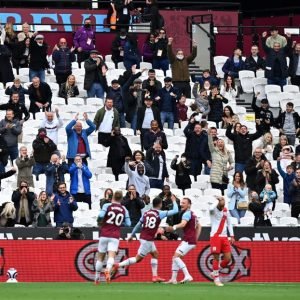