West Ham midfielder Declan Rice is never far from speculation linking the ace with a move away from the London Stadium.

Perennially touted with a move to Manchester United and Chelsea in particular, the 22-year-old is amongst the hottest properties in the Premier League.

A player who has always been rumoured between Chelsea and Manchester United, he’s always been on their list, is Declan Rice. Do you think there are chances of him moving in January? I think it will be really difficult because of the amount of money they need to sign Declan Rice from West Ham. They ask for a lot of money so January is not so easy. Is he a possibility for both clubs? It will be an interesting one with Declan Rice to see in the coming months what is going to happen and in the summer.

So far this season the 26-cap England ace has scored twice and provided two assists in nine appearances across all competitions.

There can be no getting away from the fact the club must remain braced for bids for their generational talent.

Albeit thriving as David Moyes’ side progress tenfold, Rice will be seeking Champions League football in east London or elsewhere in the near future.

Moving in January must remain off the cards due to the volatile nature of the market and the likely inability to sign an adequate replacement.

However, attempts to sign the London-born ace next summer would appear to be inevitable.

Valued at £63million and under contract until 2024 (Transfermarkt), West Ham would rightly demand in excess of £100million for the combative midfield star.

Should West Ham Cash In On Declan Rice Next Summer? 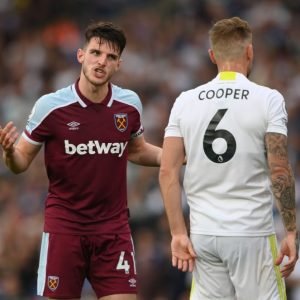 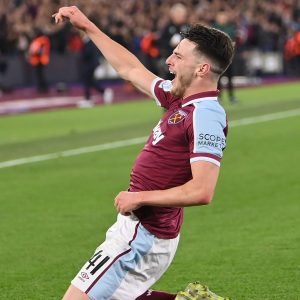