West Ham have been linked with a move for Red Bull Salzburg forward Patson Daka in the last few days and it’s safe to say that many of the Irons faithful are excited.

Reports coming out of Spain claimed that the Hammers were in active negotiations with the Austrian Bundesliga club and Daka with a view to an £18m move during this transfer window.

Having been chased by Liverpool and both Manchester clubs for some time, the 22-year-old Zambia international is clearly a player with immense potential, as his scoring figures this season have illustrated. With 11 goal involvements in just eight league outings this term, Daka certainly seems to be the next big thing to come out of the Red Bull Arena.

Twitter: @WHUFCFZ @ExWHUemployee He would be great, but if, as reported, there’s interest from Liverpool and Arsenal, his pr… https://t.co/a1Gmus9i0q (@powergoose73)

Twitter: @WHUFCFZ @ExWHUemployee This guy sounds perfect for us. Not that I’d heard of him before this week.

This would be the best of the bunch imo. Has all the attributes we're looking for in a striker. Can be technically a tad clumsy but got bags of pace, power and finishing ability.

Would You Like To See Patson Daka At West Ham? 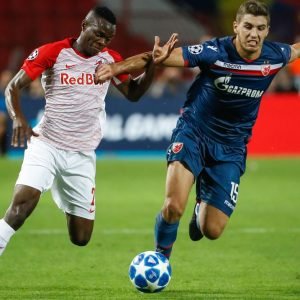