The experienced Scottish international left the Hammers in January – ending a four-year spell at the London Stadium.

Having watched Rice enter the Irons dressing room at a young age to leading the side on the field, the 33-year-old is well placed to pass judgement on the England ace.

Speaking ahead of the Euro 2020 tournaments start this weekend, Snodgrass has told talkSPORT, as cited by the station’s official Twitter account, of the qualities his former teammate possess.

The minute I saw him. I knew that he would be a great young character. He asked questions. He wanted to get better from the very off. James Collins helped him a hell of a lot and spoke to him in areas. And helped him with key points. He’s very, very level-headed. He’s got a great head on his shoulders and a great family around him. He’s just a lovely kid who, for me, loves the banter. Mark Noble has taken him under his wing. He’s honestly just turning into Mark Noble, honestly, it’s unbelievable.

The 28-cap Scot went on to say Noble has ‘taught’ Rice how to captain a side, before questioning why the man known as ‘Mr West Ham’ was never recognised by England at senior level himself.

Learning off such characters as Noble and Collins was always likely to stand the central midfielder in strong stead.

There’s no doubt Rice has grown exponentially as both a leader and a player in the last 18 months – now a key part in David Moyes’ side moving forwards.

Europa League qualification this year will be another important step forward in the 22-year-old’s career, one that will hopefully continue with the Hammers should the club continue to keep matching their prized assets ambitions.

Should Declan Rice Be The Next Permanent West Ham Captain? 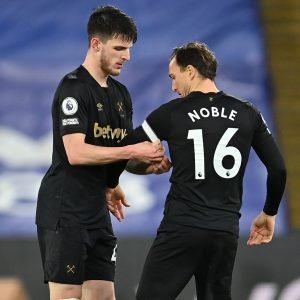 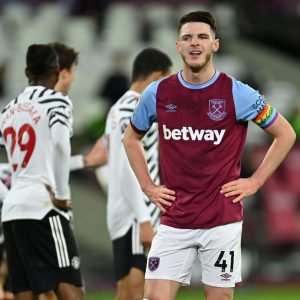