West Ham United kept their unbeaten run going with a 0-0 draw against Aston Villa on Monday night, but some Hammers fans feel that they’ve been hard-done-by the referee, Mike Dean.

If the game went in West Ham’s favour, they would’ve jumped into third place on level points with Manchester City following their loss to Norwich City on Sunday.

And after the final whistle, these West Ham fans had their say on the referee’s performance…

Twitter: @WestHam Don’t be excited about that, joke. Mike Dean is a useless excuse of a referee (@JacobC2018)

Twitter: @WestHam Was always gonna be only one winner tonight https://t.co/FeeJg0UlsR (@WestHamCF)

Twitter: @WestHam Been mugged right off by dean (@billy_whufc)

Twitter: Due to Mike Dean being a complete novice at his job, I will take that point with open arms. (@WestHam_Central)

The game looked like a typical one with Mike Dean in charge, as, yet again, he tried to make himself the centre of attention by making it as controversial as he could.

John McGinn’s two-footed tackle on Sebastien Haller went unpunished, but as soon as Arthur Masuaku made a questionable challenge, Dean was the first one to react.

He sent the left-back off even though the linesman, who was in a perfect position to see the tackle attempt, hadn’t flagged it as an actual foul.

Also, a blatant dive from Wesley wasn’t in his interest, as well as a headbutt from Anwar El Ghazi on Tyrone Mings.

In the second case, VAR has decided to review it and tell Dean about a potential red-card offence, but the man-in-blue decided against reviewing it by himself.

That had it’s effect in stoppage time as Mings denied Ryan Fredericks a perfect opportunity to score by clipping the right-back enough for him to lose balance – which also wasn’t in Dean’s interest.

Overall, I think the Premier League, as well as VAR, would be better off without the 51-year-old. It’s a shame it probably won’t happen anytime soon due to FA’s policy of appointing British referees only. 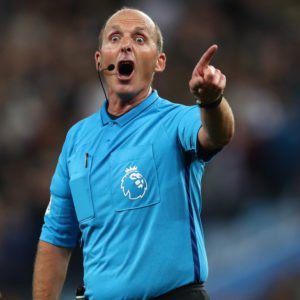 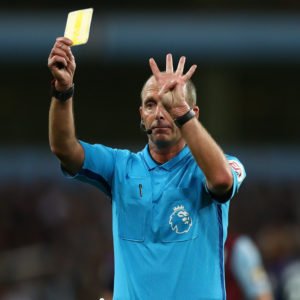