With both main goalkeepers Darren Randoloph and Lukasz Fabianski well into their thirties, Ramsdale, at just 22, was linked as a home-grown ideal long-term replacement.

Consequentially, a previous Claret & Hugh report claimed the Irons were maintaining an interest in the young ex-Bournemouth shot-stopper, who is enjoying just his second campaign in the Premier League.

A summer move is said to be conditional on whether Sheffield United are relegated from the Premier League – and the Blades are languishing at the bottom of the table.

Sheffield United are 12 points away from Newcastle and Brighton at 17th and 16th place respectively as the spectre of relegation looms.

However, that did not prevent McGoldrick from speaking out in defence of his teammate. McGoldrick – who scored the winner against Villa – believes Ramsdale is destined to be one of Sheffield’s best ‘keepers.

‘[Ramsdale] is a top, young goalkeeper. It was his first year in the Premier League last year. Before that he was in League One,” McGoldrick told BBC Radio Sheffield after the game.

“He’s going to be a top goalkeeper for Sheffield United. He’s our number one. We see it every day how good he is and he’s getting better and more confident.’

McGoldrick’s affirmations seem formidable, but the context of relegation could change the goalkeeper’s situation.

The Blades may be tempted to raise funds ahead of a promotion push through the sale of key young assets, and Ramsdale may find plentiful suitors in the summer.

Should Ramsdale replace Fabianski in the summer? 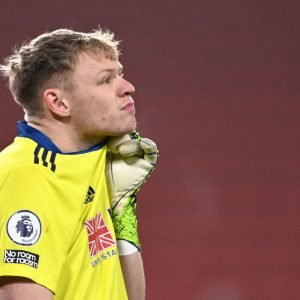