Despite not winning since January and dropping multiple points from winning positions, Monday night’s performance against Liverpool was one to fuel new hope in the hearts of some West Ham United fans.

Georginio Wijnaldum opened the scoring for the hosts inside the opening ten minutes with Issa Diop equalising straight after with a smart header from a corner.

Pablo Fornals put the Hammers ahead after the break but goals from Mohamed Salah and Sadio Mane ultimately set the final scoreline.

But the score doesn’t tell the whole story, as the visitors were excellent on the night despite falling just short in a very tight loss.

Due to Ryan Fredericks’ recent shoulder injury, 19-year-old Jeremy Ngakia was handed his second first-team start and a second one against the UEFA Champions League winners.

Apart from the forced change, David Moyes also opted for returnee Felipe Anderson as Arthur Masuaku was entirely dropped from the matchday squad due to being ill.

These West Ham fans were quick to give their immediate reaction to the final scoreline and shared their thoughts on the team’s performance.

Twitter: @WestHam Proud of us tonight. Need to keep that up. (@Irons_Home)

Twitter: @WestHam Play like that the rest of the season and there’s no chance we’ll go down. Well done lads ⚒ (@WestHam_SW)

Twitter: @WestHam A lot more confident of us staying up now, 3 points needed against Southampton ⚒ (@georgemoss77)

Twitter: @WestHam So so disappointed with the result. But to be honest great effort against an unbeaten Liverpool. Let’s hope we can learn from this (@beccaaaxx_xx)

Twitter: @WestHam This is really painful. I feel proud and disgusted at the same time. I love you but hate you all the same. Good night. (@WestHamCF)

Can West Ham turn their season around? 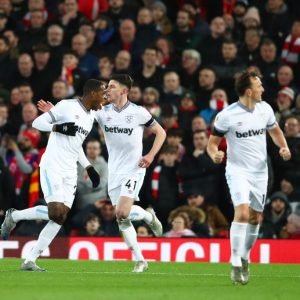 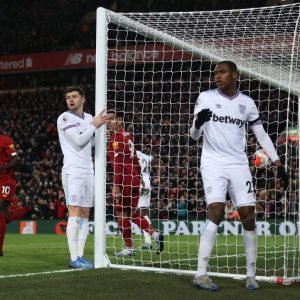